Which Will Be The Next ‘Wood’ To Emerge after Hollywood, Bollywood, Nollywood and Hallyuwood? (October 2020) 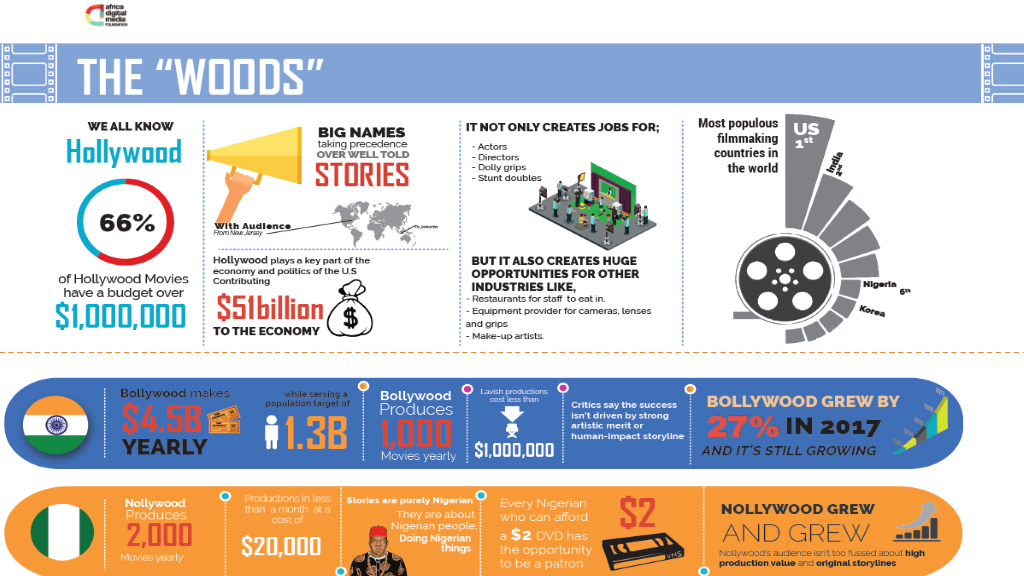 We’re all about growing the creative and digital media industry across Africa, and one of the biggest opportunities for achieving this is the film industry. We dug deep into the secrets behind the success of all the well-known ‘woods’: Hollywood, Bollywood, Nollywood, and Hallyuwood, and extracted the recipe for what we as Kenya need to do to be the next ‘wood’.

We have recently published an article on this in kenyabuzz and in The Sunday Standard, and most importantly have created our own exclusive infographic which you can find here

To begin with, it requires national backing. The population, legislators, and investors all need to put their all into supporting the industry for it to grow. The policy environment needs to be conducive to allow for filming, for freedom of speech (ideally), and for for-profit distribution.

Secondly, to reach a global audience, you need to tell global stories that everyone can find some common ground with. A report written by Nicolas Miraudot, of the OECD, puts it eloquently: “A global brand has to cater to the tastes of consumers in different countries, which consequently causes it to lose some of its local characteristics, but it also needs to have its own identity to differentiate it from its competitors.”

This could be applied to any country that wants to foment a film industry that reaches beyond its national borders. This is comparable to internationalised versions of national cuisines, making the exotic more palatable, such as Asian restaurants outside of Asia toning down their spiciness, or Indian restaurants serving meat versions of traditional vegetarian dishes.

Thirdly, you can’t scrimp on production quality. Top-notch productions that draw in big bucks require investment in top talent and high-end equipment. This means investing in cultivating talent (the Africa Digital Media Institute based in Nairobi is an example of this) and teaching international standards of technical skills.

It also means providing access to funding for production so that teams can access cameras, lenses, hardware and software to produce the best quality cinematographic outputs that can make it to the silver screen in all corners of the world, from Hollywood to Hallyuwood.

Whilst some East African film industries have gained enough local traction to warrant their own ‘wood’ suffix — consider Kenya’s Riverwood, or Tanzania’s Bongowood — they are still far from  gaining the notoriety and traction that is necessary for them to contribute significantly to the economy, through revenue and job creation.

If all the right ingredients are combined, this is possible for these East African countries, and there is certainly space on cinema screens and, particularly, on online streaming platforms, for more creative, global content. We can hope that the stars align and the ingredients fall into place so that the next ‘wood’ might just be an African one.