The Hunger For Creative Content – published in Marketing Africa magazine 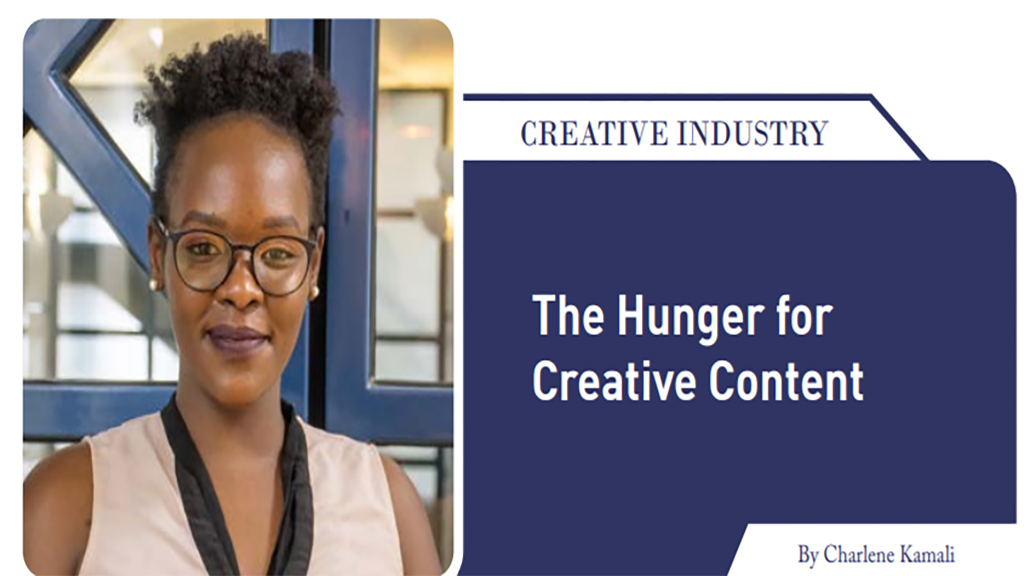 The below article was originally published in Marketing Africa Magazine in December 2019, and we are sharing it again here as the content is more relevant than ever. Article written by Charlene Kamali, from the Africa Digital Media Foundation.

As Africans, we all grew up being told that there was no definition of success outside of being a doctor, lawyer or engineer. Unfortunately, everyone neglected to mention that the economy we were being prepared for would transform, and failing to diversify our skills would render us obsolete. The creative outlets we were steered clear of, have become some of the biggest industries in the global economy today – are we equipped to ride the tide?

The creative industry encompasses an array of knowledge-based economic activities including, but not limited to, advertising, architecture, arts and crafts, design, fashion, film, video, photography, music, performing arts, animation, video games, and TV/radio. Amidst the looming threats to the global economy, the creative industry has proven to be more resilient than most. The global market for creative goods doubled from $208 billion in 2002 to $509 billion in 2015. However, it’s important to note that of the content consumed in Africa, 90% of it is foreign. Despite the immense amount of opportunities in the creative industry, we have yet to fully penetrate the industry and make it profitable for us. Is this because the content we have consumed from this industry through movies, music or books – have almost exclusively featured faces we can’t identify with? Is there room for diverse content in the creative industry?

Fun fact: There will always be a hunger for creative content.

AFRICAN ART AS A POLITICAL STATEMENT

Fela Kuti used his music to speak truth to power in a period of political disarray in Nigeria. Miriam Makeba, fondly known as Mama Africa, used music to advocate against the apartheid regime in South Africa, which led to her being named a United Nations goodwill ambassador. Creatives have been the driving force behind many a revolution, even when it could be the difference between life and death. Most recently, Robert Kyagulanyi, commonly known as Bobi Wine, has continuously used his music to speak to the struggles he saw every day living in the ghettos of Kampala, and now he represents those very people in parliament. Angelique Kidjo, an artist from Benin, uses her music to speak ebola, AIDS, female genital mutilation and homophobia. In response to the mini skirt bill in Uganda that essentially put the blame of the sexual harassment and violence that women were facing on their dress code, Kemiyondo Coutinho created a short film that spoke to the plight of the ordinary Ugandan woman and the impact that chauvinist policies like that have on propagating the violence they face on a daily basis.

ART AS A FORM OF HEALING

Art has been used by communities around the world to spread messages of peace and humanity amidst some of history’s worst atrocities. The Ubumuntu Arts Festival in Rwanda is one of the most beautiful portrayals of this. The festival happens every year to commemorate the end of Kwibuka, the national genocide memorial period, as a forum for artists around the world to come together to showcase the power and peace in focusing more on our common humanity than our differences. A similar example is the Global Peace Festival, which takes place in the Philippines, Indonesia, Malaysia, Kenya, and Nepal, and uses art and culture as a tool to spread the message of reconciliation amidst an array of backgrounds and beliefs.

AFRICAN ART IN THE DIGITAL ERA

Today, the global creative industry is heavily influenced by African culture and creativity – so much so that there exist genres in the music industry called Afrobeats, Afro-fusion and Afro-futurism in literature and television. The fast-growing market for African content can largely be accredited to the global surge in digitization over the past few decades. In this day and age, you don’t need to move to Hollywood and spend years waiting for your “big break” among similarly starving artists. Social media, and the internet as a whole, has simplified the process of content distribution. You can produce creative content and be able to easily share it with the world from the comfort of your home.

The marriage between art and technology has led to an array of African artists having their work recognized almost entirely through digital marketing platforms. Content creators like food, lifestyle and travel bloggers/vloggers have grown entire careers that are not only profitable but also serve as a platform to showcase the beauty of their countries, communities and culture. Whether it is through major motion pictures like Lion King, cross-cultural collaborations like Beyonce’s latest album that only featured African artists or Afro-futurist productions like Black Panther, African creatives are transforming the global entertainment industry.

The creative and technology industries have immersed themselves in nearly every aspect of our everyday lives to the extent that they have influenced the way that we speak, think, move and transact. To many people, every form of margarine is Blue band, every cab is Uber, every form of toothpaste is Colgate – all of this is the impact of a group of creatives who presented these brands as ones you could trust, so much so that they become the default. Every sector in the economy is looking to the creative industries for this effect – to be able to speak to people’s emotions and share their message in the most intriguing and versatile way amidst the swarm of competition.

The power and impact of art are undeniable, but the creative industry requires a vast amount of support to become the panacea it has the potential to be. There are several challenges facing the creative industry, especially in Africa. Access to funding, distribution platforms, and professional skills training to be able to create quality content are some of the biggest hindrances for African creatives. Digitization has made it easier to share your content with the world but, in the vast sea of content available for people’s consumption, the question becomes how do you stand out? What makes your story exceptional enough to grab the attention of a generation with a short attention span?

In an era with a plethora of options, brands are fighting to stand out in the market. No one wants to stand in long queues at the bank or sit in traffic to get to their favorite restaurant –  it is for this reason that there has been a boom in the demand for mobile apps. With streaming platforms like Netflix, Showmax, and Amazon Prime, you’re able to get and control the entertainment you consume. Attention spans are getting shorter every day and brands are relying on creatives to tell their story through song, film, and animation to be able to intrigue people enough to grab their attention.

The Africa Digital Media Institute (ADMI), a creative media & technology training institution based in Nairobi, is transforming the creative education to combat this skills gap. ADMI believes that the looming unemployment crisis has little to do with the unavailability of jobs but rather with a jobs mismatch. ADMI’s solution is to incorporate practical learning, taught by industry practitioners at the top of their field, industry exposure, and work experience to give its students a wholesome approach towards creating in the digital age. Through their partnerships with the best creative schools around the world, students at ADMI are able to graduate with the ability to create content that creates an impact and is marketable not only in Kenya but around the world – all without leaving the country. The innovative learn and work model ensures that students build a portfolio of real-life work experience in their fields while pursuing their education – setting them apart in a job market that is exhausted with training entry level employees before they are ready to work.

ADMI prepares its students to be ready for this market; a fast-paced economy whose needs have vastly transformed from the era when all you needed was a degree to get ahead. The creative industry is the present and the future. With the unemployment rate in Kenya at a daunting 9.3%, it’s time to diversify the economy to respond to the incalculable opportunities for young people in the creative industry. African creatives are creating art and infusing it with aspects of their culture to transform the African story from one of poverty and famine to the beautiful things we all know and love about our cultures. However, so much of it never sees the light of day because of the lack of investment in opportunities for young African creatives to develop and blossom in their art. Active investment in nurturing the overflow of creative talent on the continent, like ADMI is doing, will enable us to penetrate and compete in the highly lucrative global creative market.

Whether music, film, literature, animation or video games are your mediums of expression, the world is listening – why wait?